I’m a little bit late with the post since the Jester Festival has already ended, but it was my first Elder Scrolls Online event, so I’d still like to write about it.

To join the event you have to „purchase” a free item in Crown Store. As the new event started and it’s the same drill I’m guessing it the usual way of joining the events and I have to say it’s definitely not intuitive. If the event is free I should be able to start it without visiting the store – it’s honestly the last place I’d look for the quest starter and I would still be wondering how to join the event if I didn’t have helpful guildies.

When the quest starting item is obtained and used – it gives a quest that sends you to a Jester Queen in Vulkher Guard who then after a short conversation will give you another quest. Overall there are 3 daily quests given by 3 different Jesters and each of these quests after completion will give you a loot chest as a reward. The chest may contain fun consumables (flower crown, fireworks), recipes for event related food, housing items, and rarely – gear. At least those are items I got (or heard that Guildies got), maybe there are even more types of items you can loot. Additionally, there is an achievement for completing all 3 quests for the first time. In fact, there are 2 achievements, since you also get one for completing the third quest. But the „big” achievement – for completing all 3 quests – is especially nice because it gives 2 things: „Lady/Lord of Misrule” title and a costume crown that you can wear as appearance of your actual head gear.

As I mentioned – when you first get the quest it will send you to Jester Queen Ayrenn located in Vulkhel Guard (Auridon), who will give you your first daily quest. Of course she’ll get a quest marker on her but if you have the zone discovered in the right area there will also be an event marker (a calendar icon) visible on the map. The event markers greatly help with finding the Jesters each next time you’re taking their quests, because the quest givers won’t have quest markers visible on the map anymore after you finish their quest for the first time.

As for the quest – Jester Ayrenn will want you to cheer up some grumpy citizens located in 3 Auridon areas:

In each of these places you’ll have to cheer up 2 citizens and they’ll get both quest area and target markers so you shouldn’t have problems with locating anything. All the 3 places are in completely different parts of Auridon though, so it’s helpful to have the Wayshrines (portals) unlocked all around the island.

After you complete the quest back at Jester Ayrenn, you will get a chest and „The Pie of Misrule” – a „memento” slottable item that boosts your gained EXP for 2 hours during the event. It isn’t a consumable so when it runs out it’s still possible to use it again as long as the event is still on.

Jester Ayrenn will also tell you to go to Glenumbra (Daggerfall) to another Jester. Don’t worry, if you don’t have that zone uncovered you will get a nearby Wayshrine unlocked so you can just teleport there directly. This is a really nice feature for new players, including me – even though I’ve started playing just recently and I only moved to the first zone after introductory zone and Auridon and I didn’t have anything else discovered yet – I was still able to complete all the event quests.

In Glenumbra, just outside city walls, you’ll see another Jester camp. Talk to Jester King Emeric to receive his quest. He’ll first want you to obtain 2 types of items, each in a different dungeon. Obtaining the items is not complicated, it’s not even necessary to kill bosses, since the items can be looted from regular mobs there or they will be laying on the ground (with quest markers over them so they are hard to miss). The dungeons you’ll have to visit are:

Fortunately both are close to the city so running around the whole zone won’t be necessary this time. But just getting the items is not the end of the quest. After you return to Jester Emeric with the quest items collected he’ll prepare fireworks out of them and ask you to light them in 3 areas of Glenumbra:

The fireworks are really pretty and because many players are doing te same quest at the same time it gets really loud and sparkly there.

The last quest giver, Jester King Jorunn, is located in Brothers of Strife (Stonefalls) but unfortunately if you don’t have the zone discovered you’ll have to run for a while because the default portal that unlocks for you is in a different area of the zone. There is another Wayshrine nearby though, so once you unlock it you will be able to return to do the daily and don’t run much next time.

Now this quest is different. For once – it’s funny, but I won’t spoil it for you. Another thing is – you have to actually steal something – I think it’s the first quest so far that actually wanted me to steal anything. It’s not just taking something that belongs to an NPC and nothing really happens. No, the quest actually wants the player to steal the item and if they’re seen (and caught) they’ll get in trouble. The item you have to steal is a specific food and favourite snack of a certain princess you have to find. After finding her the quests objective is to lead her to Jester Jorunn but be warned! Teleporting resets the princess to her default location, so leading her is a must here.

After the quest giver is reunited with his beloved princess you get the loot chest and an achievement. If it was the last daily for you – be prepared for getting an awesome crown (it goes in your appearance tab) and title, too! 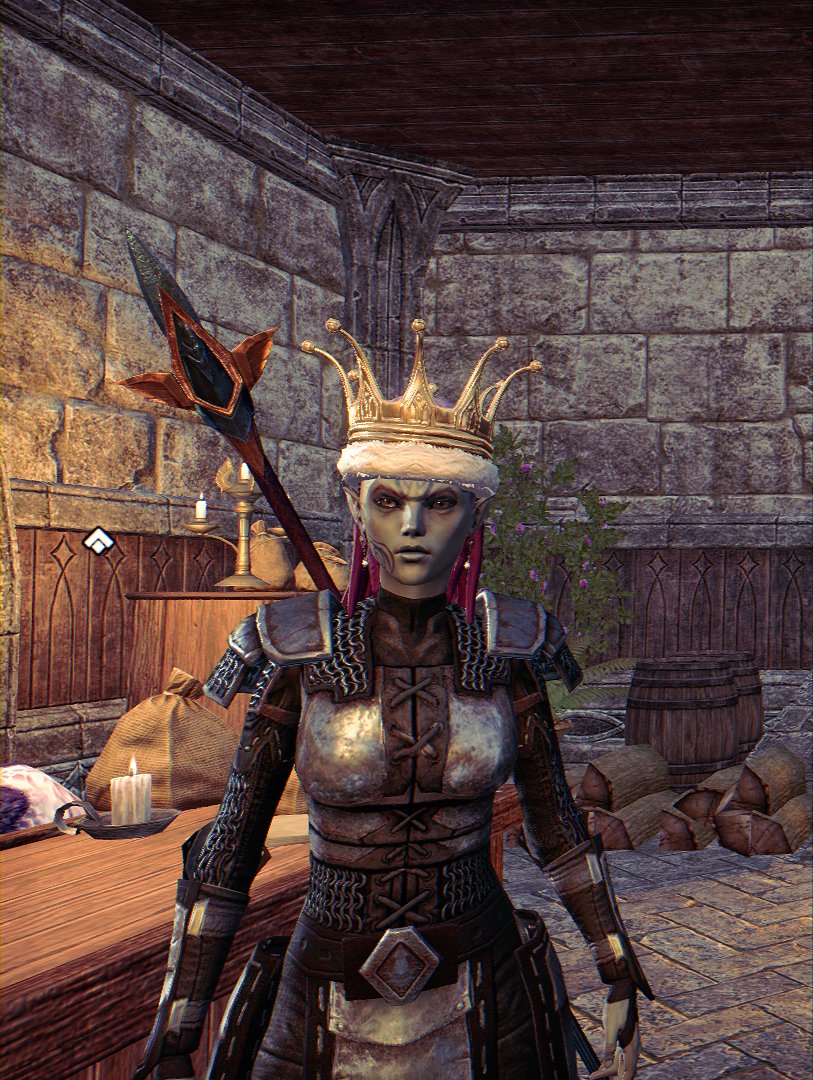 The event was quite fun. I wish there was more happening though than only 3 dailies (could be some minigames or just more festivities) and it lasted longer but still it was ok also in its actual form. I’m really glad I could participate in it and was able to finish it. I also have to admit I didn’t realise straight away that the portals opened for me in Daggerfall and Stonefalls so to Daggerfall I travelled on a ship and i thought I wouldn’t be able to go to Stonefalls at all during this event. Fortunately i noticed the portal there just near the event end and still managed to do Jester Jorunn’s quest even after getting annoyed at the guards chasing me and the princess resetting on teleporting.

Now, especially that I got a day off from work, I’m enjoying the current event in ESO – Elder Scrolls Online Anniversary, so you can expect another post about it next week. Until then!