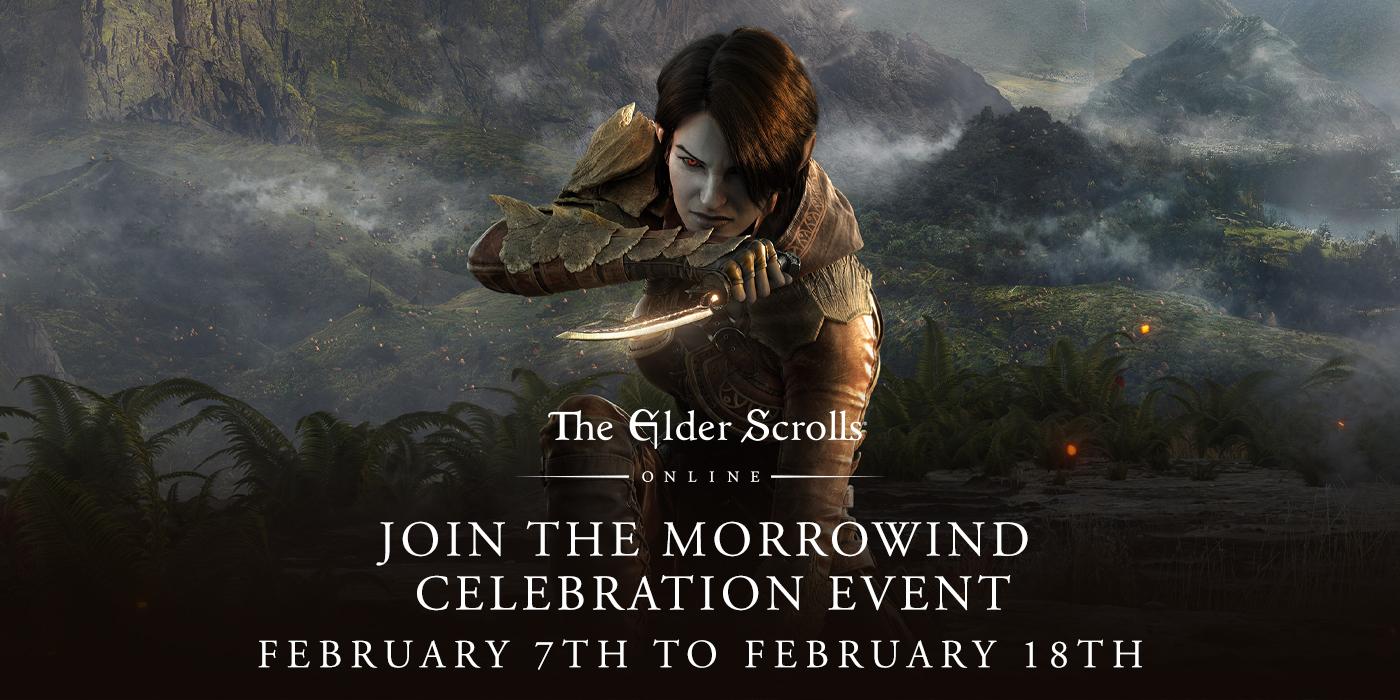 Jump to the Celebration guide.

Finally, my long awaited Morrowind Celebration event has started in ESO! But, first things first. What even is Morrowind?

In Tamriel, the Elder Scrolls Online playable continent, Morrowind is Dark Elves’ land. It consists mostly of 2 parts: big volcano island, Vvardenfell, and its surrounding part of Tamriel’s mainland. If you want to learn more about Morrowind’s geography, history and culture you can check this link. Unfortunately, only small bits or Morrowind were open to play in base game ESO, bu twith the first big The Elder Scrolls Online expansion (“chapter”) named after the whole land, Morrowind, Vvardenfell was added to the game. This is the expansion that you can buy with a discount during the Celebration event.

I can admit without any shame that Vvardenfell is, as for now, my most favourite zone in the Elder Scrolls Online. It’s not your standard MMO zone (which are usually a happy green forest, a dark scary forest, a winter zone, a desert zone and a steppe/grassland zone). As I mentioned before, it’s a volcano island, so it comes with all such land’s blessings and curses. On one hand it’s rocky so you don’t have lush green areas, no forests and such, instead you have volcanic ashes and lava streams, but on the other hand, when there is soil it’s quite fertile. In such an environment only specific organisms could thrive and so while you do have standard grass and trees in Vvardenfell the whole zone is filled with a plethora of various kinds of small to GIANT mushrooms and fungi.

One of the things I love ESO for is how it thoroughly it shows you all the Tamriel’s playable races’ cultures. Before ESO my only Elder Scrolls game was Skyrim, which, shamefully, I’ve never finished. Of course, Skyrim that takes place Nord’s lands shows mostly Nordic culture, but since I’ve always loved elves in general, I’ve always chosen them rather than Skyrim human or beast races. Then, several years later, I tried ESO and of course I was torn between High and Wood Elves but since I also usually go for a mage class I picked High Elves race for my character and… I didn’t like it. And there was the same result every time I started from a scratch. After these fails I tried a Dark Elf and loved the race so much I play with the character I created back then until now and I can’t even imagine playing any other race, actually. But I still didn’t now much about Dunmer’s culture until I started ESO’s Morrowind chapter.

And after I only started questing in Vvardenfell I instantly fell in love with the zone and with Dunmer race even more. I absolutely loved learning so much about my character’s people’s culture, how complicated their society is and how interesting are their beliefs. Also she met and helped an actual god!

Of course there is also the major zone storyline with everyone’s beloved Dunmer assassin, Naryu Virian, who also gives her face to any ad associated with the Morrowind expansion (including, of course the great Morrowind cinematic trailer, which you can watch below). As for me – personally I didn’t hate this storyline but I have to admit I was more interested with everything else going on on the island.

And there is a lot going on besides Naryu Virian and Morag Tong in Vvardenfell. As you could see in the trailer the Dwemer (dwarves) and their machines are involved in some of those things, there is a lot of quests big and small, long and short and a lot of exploring to do, too. There is also a new class that was released (and bound) with Morrowind, that utilizes nature magic and combat pets. I’d love to try out this class, called Warden, as it looks extremely fun, but unfortunately, currently with my full time job I only have time to play one character and I love my Dunmer Sorcerer (although with the coming Necromancer class I do plan to create another character I’d actually play with, but a lot can change in my life until the class is released in June along with Elsweyr). Also, since I’m talking about Morrowind AND about questing there I wouldn’t forgive myself if I didn’t use this opportunity to mention the questline that was one of my favourites in the entire game so far (but I still haven’t finished Summerset… YET). When I first started this questline, during its begining part it was awesome and kind of scary but super interesting still, then it started to get more and more crazy with every step, and after a while it actually made me cry of laughter really hard, especially after one of the NPCs (who wasn’t involved directly in the whole thing) pointed out that there might be something wrong with my sanity after he learned what I was doing. I don’t want to spoil too much for you but enjoy your Melodic Mistake quest and say hello to this Cinnamon Bun from me, when you meet him 😀 →

Now that you roughly know what is Morrowind, let’s talk about the event. The Morrowind Celebration event lasts for 11 days (the current one has started February 7th and ends February 18th). During this time Morrowind DLC, as well as the Morrowind Collector’s Pack Bundle, are discounted in-game and outside of it. Additionaly, while the event lasts, there are also various items available in the in-game Crown Store that are connected to Dunmer culture (outfits, motifs, furnitures, even houses!). I actually love most of the Dunmer housing items and motifs so it’s a hard time for my wallet 🙁

Store sales are great, but if you already have (or just got now!) Morrowind, there is way more for you to get from the event. First of all, there are several daily zone quests in Morrowind and while normally you receive a box with rewards for completing each of them, now you will get 2 boxes for each. Secondly, for each killed boss in the zone, you’ll get double rewards. This includes Delve bosses, Public Dungeon bosses, regular (queueble) dungeon bosses and even Trial (raid) bosses. The first completed World Boss and Delve daily quest in Morrowind each day will reward you with one Event Ticket that you can turn in at Event Impresario NPC (located in Glenumbra, Stonefalls and Auridon) for Indrik Feathers (you’ll need 4 of them, one of each kind, to be able to summon a beatiful Indrik mount), and Indrik Evolution Berries (again, you’ll need 4 different Berries to evolve your already beatiful Indrik into one of the 4 versions). But hey, that’s not all! If you are into crafting and collect materials, from every crafting node in the zone you will also get double amounts of them druing the event!

There are 4 daily quests in Vvardenfell that will give you the Event Tickets I mentioned above, but also other awesome rewards. Unfortunately the dailies are not available straight after you come to Vvardenfell for the first time but it’s fairly easy to unlock them.

Each box you receive from these quests has a chance to contain a motif page of the specific faction (Morag Tong or Ashlander), depending on which quest the box was a reward for. For learning all the motif pages in each style you unlock achievements.

If you didn’t think it was enough celebration yet, with each DLC celebration comes also a free ESO Plus week. What is ESO Plus? It’s a subscription plan for The Elder Scrolls Online. Each month it brings you some Crowns (paid currency) that you can spend in ESO in-game Crown Store, for example on special ESO Plus deals. Additionally as a subscriber sometimes you can get FREE ITEMS from the Crown Store, like deadric princes or The Tribunal statues for your in-game house or it’s even some amazing premium outfits!

In addition to all the Store fun, ESO Plus also unlocks you ALL. ESO’S. DLCs. It means that as long as your ESO Plus is active, you can play any DLC without buying it. Note that Expansions like Morrowind, Summerset and, in the future, Elsweyr, when they are released, they are counted as Chapters rather than DLCs and these you do have to buy in order to be able to play them. Usually though, with a release of a new Chapter, the previous one automatically goes in ESO Plus offer along with other DLCs, so at the moment, with Summerset released, Morrowind is unlocked for all ESO Plus subscribers.

Not enough still? How about a separate botomless bag for all your crafting mats? Or an ability to dye your costumes? Or EVEN MORE? And now the event going on you can still try out the whole ESO Plus glory for free for several days. I personally couldn’t go back to not having the craft bag after one of the past ESO Plus trials 🙂

As you can see there is a lot to celebrate when it comes to Morrowind. I’m really happy that my favourite zone is celebrated and appreciated. The story writers, the artists, the devs, the voice actors, they all do deserve it for their awesome work. If anyone responsible for my joy, delight, laugh, tears and so many hours spent in Vvardenfell and any other place in Tamriel ever reads it: A big THANK YOU, from me to you.