Hello everyone! It might have seemed like I disappeared from here but on the contrary  – I was working on some little project of mine concerning this blog. It’s finished now, but first things first.

And I maybe didn’t have much time to play it but so far I loved everything I saw in Summerset. Above is just the login screen that managed to amaze me with its beauty on its own.

I also have to admit, I’m a big fan of ESO loading screens art. In fact one of such paintings is currently on my PC’s wallpaper. The Summerset loading screens are truly beautiful as well, a real pleasure to look at.

As I play on European server, after I logged in to PTS, the character selection screen was empty for me – the NA characters were copied to PTS a while ago but the EU characters will be copied on May 7th. That’s why I had to create a completely new character. And this is also when I noticed the game is overlayed with my username. This is a pretty smart thing, especially that there were some secret beta contents there that beta testers weren’t allowed to share back then, so, with the username overlay, if someone uploaded a screenshot or a video containing this content it would be easy to tell who posted this content first. Now the secrecy is lifted though.

Anyway, I got to play with a character creator and… no surprise here, there are no new features there. Except the newly introduced and popular glitch which causes the Novice Gear to look the same as „No Gear” aka… underwear.

On live server I play a mage so this time I decided to try out a rogue, my other favourite class in video games. I could have picked another mage since there is a new mage skill line coming with Summerset but I don’t expect to get to max level on beta and that would be required to fully test it. So I decided to just try a different class instead.

The starting zone is…. BEAUTIFUL. Not to spoil too much, you start in a really dreamy zone and it’s also very immersive, I loved it. But on the other hand, as I’m still relatively new to ESO, I’m not sure if the previous starting zone will be still there after Summerset launch and I wouldn’t be happy if was removed. My live character started in Soul Shriven, but will the newly created characters only be able to start the game in this new zone? This is what I will test when my live characters get copied to PTS!

After you finish the starting zone that teaches you how to play you are back to the „real” ESO world and you are free to play as you usually do. You get new storyline quests and can explore the new areas. And believe me, the fist area you are in is STUNNING.

But, this is also where I found my first 2 glitches! Unfortunately, the first one, that was funny and bizarre , I didn’t get to document, plus it disappeared after relogging as expected.  My character at some point not only disappeared but also to some extent was able to hover over the ground. I wouldn’t mind it that much but I couldn’t use any of my skills since apparently the weapons also became hidden from the game fully rather than just be invisible. But like I said, everything appeared and worked as intended to after relogging.

Another glitch I found, and this one I was able to even record (and of course – REPORT) was also about disappearing objects. At first I thought it was part of the area magic, since I spotted there some teleporting (and beautiful) magical deers that seem like they disappear for a moment because of the teleporting ability. But this „magical” disappearing chest wasn’t supposed to disappear, I think. Not completely, at least.

As you can see it doesn’t only get invisible but it’s removed from the zone completely when I’m close to it and reappears back when I look at it from some distance AND from an angle.

One of the things I was really curious about in the update 18 was daily gifts. In the most of modern MMOs there is a feature rewarding players for daily logging in – be it even small rewards like bundle of health potions, it’s always very welcome. The older games that didn’t have such feature often introduce it later to stay competitive, but not ESO – and this was a thing I was really missing in the game. It’s the small things, you know. Someone mentioned in the comments here a while ago that they don’t like cluttered game UIs. ESO doesn’t have this problem, but in my opinion it’s the opposite here. ESO UI sometimes feels too simple maybe even to the „outdated” level. I love it that it’s clean but it could use some updates. Not having the daily rewards was another thing that was making the game feel outdated for me but this feature is getting a fix with Summerset and I really love it!

When I was testing it the daily rewards weren’t fully launched yet – you can see the UI is showing January even though it was April. The list of rewards was also empty so I’m really curious what the daily rewards will be for the whole month, plus, will they be the same every month or will they vary depending on the month OR maybe they will be completely different each month. I’d assume they will stay the same every month but we’ll see. 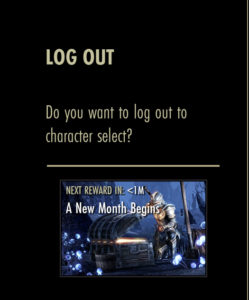 Additionally, after selecting a log out to character selection screen in the menu, you will get a notification about what will be your next daily reward and how much time you have left until you can claim it. I really love this idea! In the previous MMO I’ve played a lot there was no timer on daily rewards so you just had to know when the daily server reset happens. And with the daylight saving time it wouldn’t be always the same. The timer on the daily rewards allows you to forget about keeping track of the daily server resets.

Another feature I was really missing in Elder Scrolls Online (but didn’t manage to complain on lack of it officially) was gifting – an ability to buy someone else in the game a Store item. I have to admit I’m quite happy that the gifting feature is also going to be introduced with Summerset. Below there are 3 compiled screenshots of the gifting UI. It seems very intuitive and well thought as you will be able to see the whole history of gifts and not only those you’ve received but also what you gave to other players and in addition there is a separate tab for the returned (and unclaimed?) gifts. I really look forward to try it out on live servers!

That’s  all about ESO beta for now. I also had an opportunity to test for a while Defiance 2050 but I’ll write about it another time. Now it’s time for promised contest!

We’re celebrating May, working ESO beta and lifting the secrecy on the Summerset main storyline!

A chibi colourful drawing like the one on the left depicting one of a video game character of your choice!  It can be either your character or an NPC.